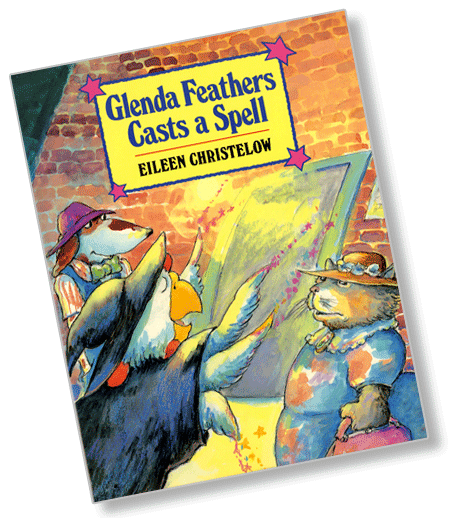 “Christelow’s action-packed, mixed-media art hilariously expands on the high jinks in this bewitching sequel to the rousing heist, the Robbery at the Diamond Dog Diner.” — ALA Booklist

When Glenda Feathers sees a sign in the window of Miss Marvel’s Witch Agency, Help Wanted—Adventure and Excitement Guaranteed, she says, “That’s for me!”
However Glenda fails the spell-casting test so she is left to answer the phone while the other witches go out to cast spells. That night, when she is alone in the office, two customers named Bernie and Phyllis walk in. They explain they lost their keys and need two door-unlocking spells right away. When the doors turn out to be those of a bank, it slowly dawns on Glenda Feathers that she is participating in a robbery.

With one mixed-up spell after another, she attempts to foil the robbers; but everything goes slightly awry until her very last spell.

The line is black pencil. The color is gouache with an overlay of watercolor crayon and color pencil.