Not Until Christmas, Walter! 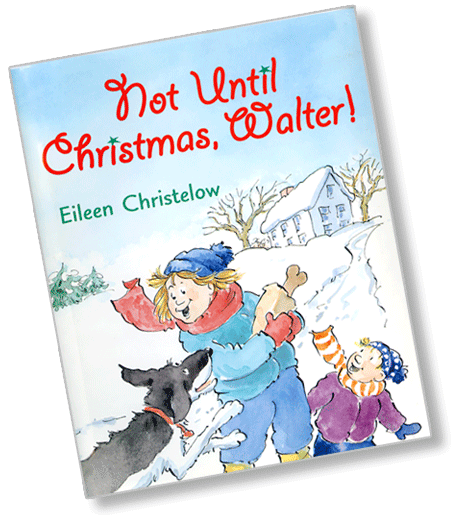 “Don’t wait for Christmas to share this entertaining romp one-on-one or in a family read-aloud.” — School Library Journal

“Line and watercolor cartoons are cheery and inviting, and the tail-thumping, soulful-eyed Walter is as ingratiating a pup as you can find. The three chapter divisions and oversized type may entice some novice readers to try this one solo! — Bulletin of the Center for Children’s Books

Walter can’t wait for Christmas. Louise bought him a present. His nose knows what it is and his paws are itching to open it. “Not Until Christmas, Walter!” Louise reminds him as she puts her wrapped packages in the living room.

The next morning the packages are gone! A trail of chewed wrapping paper and dog biscuit crumbs leads Louise to the culprit. ..who lands in the doghouse.

It’s hard to stay mad, though, at a dog (who rescues Louise when she’s lost in the woods and) whose tail-thumping enthusiasm adds so much to the
Christmas spirit. Even a busy nighttime visitor succumbs to Walter’s biscuit-begging charms.

The story is told in three chapters although the book maintains a picture book format.

Pen and ink and watercolor.