Olive and the Magic Hat 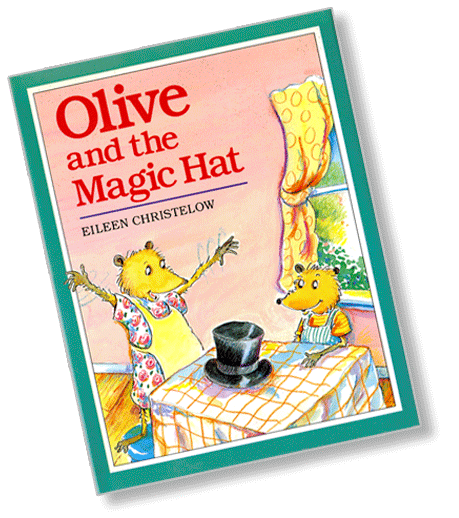 “This is a story that will have much appeal to young listeners: suspense (will the opossum children get father’s hat back in time for his party?) danger (will the fox catch them?), a birthday celebration, and family love. Droll watercolors and appealing animal characters make this fast-moving story a winner.” — School Library Journal

Olive Opossum and her brother Otis are admiring the fancy dress hat that will be the family’s birthday gift to Father. “If I say some magic words over the hat, something wonderful might happen.” says Olive, “Say some magic words,” Otis answers. Olive does, and in the excitement that follows, the hat flies out the window and lands on the head of Mr. Foxley who just happens to be passing by.

Now Olive and Otis have a terrible problem. How can they get the hat back in time for Father’s party? “Mr. Foxley is a fox!” warns Otis. “He might eat us!” But his warning doesn’t stop Olive from trying. As she tries one scheme after another, Mr Foxley becomes convinced the hat is magic. But even he becomes alarmed when the hat begins to talk!