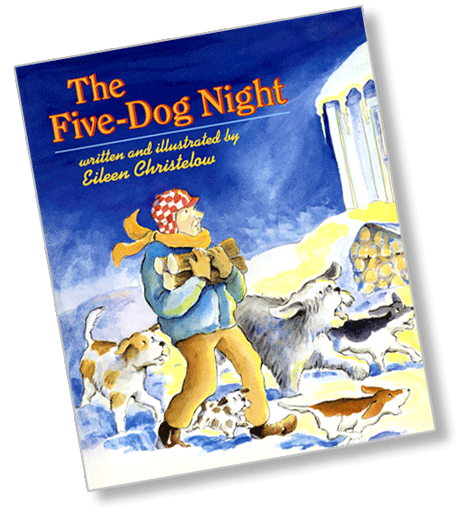 “Old folks and dogs comprise the cast of this fresh and comical tale that show there’s more than one way to beat the frigid weather… Pen-and-ink details adding a humorous punch.”

Ezra and his five dogs live high on a hilltop. Just down the hill lives old Betty, who visits daily with cookies and advice on how to stay warm on the cold winter nights. But Ezra doesn’t want Betty’s advice­—or her blankets which she offers him after the first snowy night.

“Stubborn as a mule,” frets Betty. “He’ll turn into a block of ice.”

After the coldest night of all, Betty rushes up to Ezra’s house to check on him. What she discovers there makes a funny and satisfying climax to this folksy story about friendship and keeping warm.

Where did you get the IDEA?

When I first heard Will Curtis, on NPR, tell how an old Vermonter kept himself warm through long winter nights with the help of his five dogs, I thought, “That’s a picture book!”

Later, I was telling my cousin, nature writer, Gale Lawrence, that I was thinking of writing a picture book inspired by Will Curtis’s story. Unbelievably, our conversation was interrupted by a phone call from . . . can you guess? Will Curtis! He was asking permission to use one of her articles on his radio program.

No one is sure. Will Curtis first read the story in Sanctuary, an Audubon Society magazine. It’s possible their story was a folk tale, told and retold.

The expression, ‘three-dog night’, has been around for a while—shared by many cultures which have dogs and cold nights.

Was old Betty in the original story?

When I was working on this book, I realized I had shared my life with five dogs. So, of course, it’s dedicated to them! The black and white dog was my old dog, Ophelia, who was also in Not Until Christmas, Walter!

My dog, Emma, aka: the Desperate Dog, hadn’t even been born when I wrote this book.

The black line is a very black pencil. The color is water color. 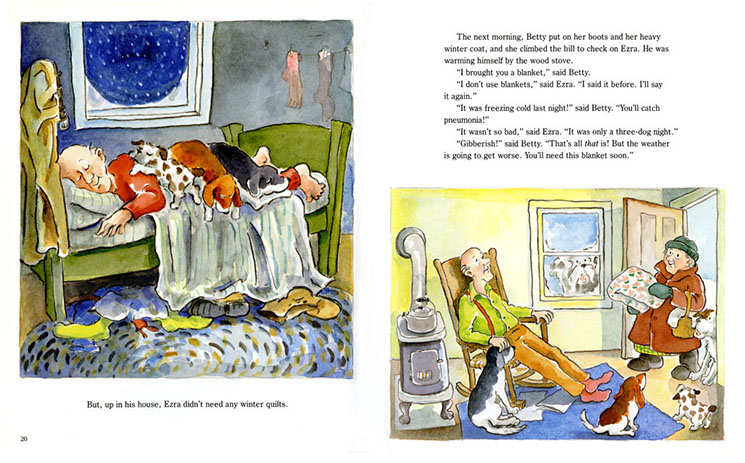